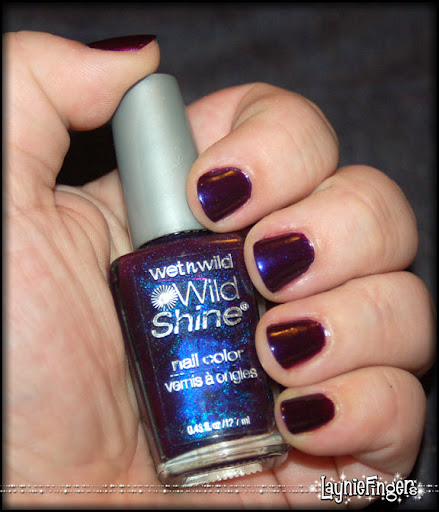 Whew! I finally get to wear some of my birthday polish! Actually, I was wearing it in yesterday's haul entry, but I hadn't talked about it yet. I'm wearing the Wet n Wild Eggplant Frost polish, and I have such mixed feelings about it.

First, there's the color. This didn't photograph anything near what it looks like in person, not that there's anything surprising about that. Interesting (to me, at least) fact- lots of digital cameras have problems capturing purples. It's something to do with the sensors inside the camera, but it's beyond me to explain. Just know that when your purples look blue, it's not your fault!

So, back to the polish... It's a deep, gorgeous blurple. You can see the blue tint in the bottle, but most of that shimmer is hidden, so that just the tinest hint comes out with your topcoat. It's a rich, warm royal purple, incredibly deep, and I just love it to bits. 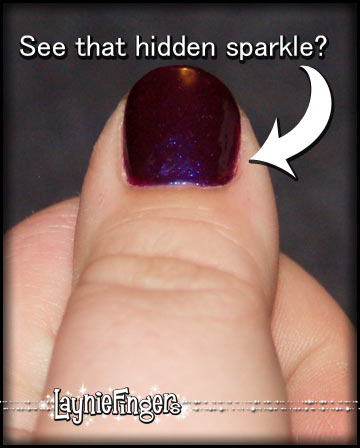 I'm not sure why they named it Eggplant Frost, though, since this is about as far from a frost as you can get without being a creme. The tiny bit of shimmer it has almost disappears, which is sort of frustrating for a shimmer/glitter junkie like me. That's ok, though... it's so pretty, I could deal with it.

Except for one this. This polish was so incredibly difficult to work with. I don't know if it's just this polish, if it's all Wet n Wild Shine polishes (I have some others to test out, so we'll see, right?), but this one had me cursing. It's like after the first sweep of color onto the nail, it dried and became miserable- clumpy, draggy, uneven, and then it bubbled like mad. I didn't do anything different than I normally do, so I can't imagine what the problem is. It was frustrating enough that I'm tempted not to use it again, though. 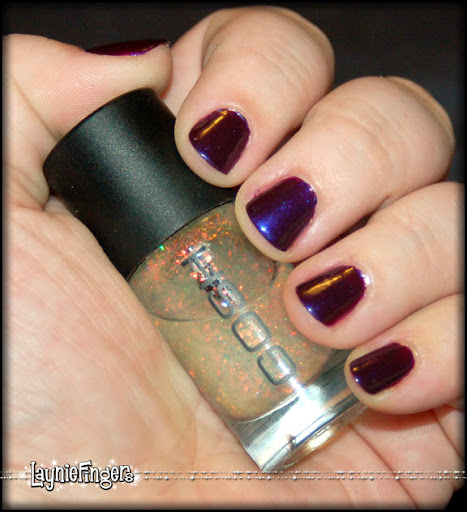 The good news is that once I got it on, two coats was totally opaque. Adding my topcoat made the bubbles almost disappear, and within minutes I was in love again, my cursing all but forgotten. It's stayed on well (3 days so far, with extremely minimal tipwear other than 1 small chip I repaired invisibly.) It's a workhorse polish, I just wish it wasn't such a prima donna to work with!

I'm planning on picking up a bottle of thinner this afternoon, maybe that'll help it. As for this manicure, I've got a hint as to what tomorrow's post will be. ;)
Posted at 7:24 PM 6 comments: Links to this post