When I first made this blog, I thought for a long time about what to call it. I love nail polish, and at the time that's what I was focused on, 100%. However, I also wanted to leave room to write about other things I love, so I wanted the name to be flexible. I decided Layniefingers was perfect, because not only would it cover what was on my fingers, it also covered things I've made with my fingers. I haven't done a crafty post in a while, so I'll just share a few pictures of things I've been working on lately. 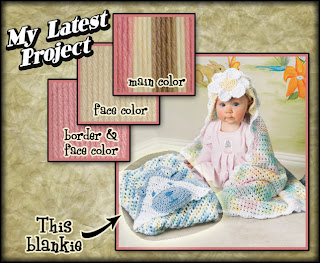 First, the crochet. I'd talked about the blanket I was making for a friend- I've finished it and am now working on a second one. I love the way it turned out. I giggled the entire time I was stitching the little face onto the hood. It's just so sweet, and I can envision a baby wrapped in it... a toddler throwing the hood over her head and running through the house at full toddler speed... or that same toddler clutching it close as she drifts off to sleep.

I'm hoping this one turns out to be the child's favorite, and it could even be passed down to her own kids, many years from now. Keep in mind, you can click the pictures to make them larger. 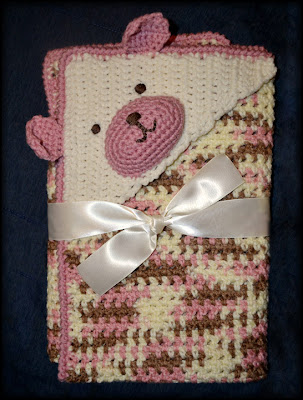 The next blanket I'm working on is a simple granny square blanket in alternating colors. Pretty, soft, and fluffy- how can you go wrong? :D 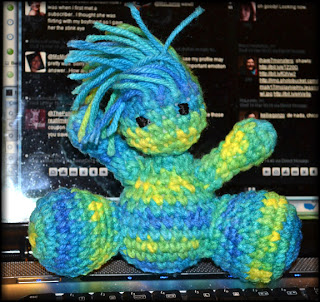 I've also done some amigurumi¹  recently. I'd bought this yarn simply because I loved the colors, but I had absolutely no idea what I was going to do with it. I thought about knitting something, but I don't really know how to knit. Also, it's Red Heart yarn, and that stuff is super rough. I wouldn't want to wear it anywhere close to my skin.

But toys? It's perfect for this! First is the little girl figure I made. At first I didn't know what I was making, really... only that I was making it. I didn't use a pattern, I just sort of made it up as I went along, taking a few notes to help the arms and legs match up. 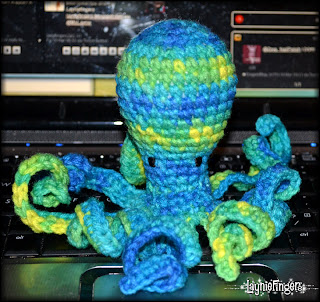 Once I got to the hair, I realized this was a girl. She's got a punky mohawk, and it can be styled in several ways. I rooted each individual strand of hair so that I could decide how I wanted it styled. Then I spent about an hour playing with the hair, pushing it to one side or the other, making tiny updos or funky mohawks. Seriously, even I was stunned at how long I played with this thing!

I set out to make another one, only with longer legs and arms. Only, as I was crocheting the first leg, it didn't want to be a leg. No, it was very clear- it wanted to be an octopus.² Who am I to argue with an inanimate object? So, an octopus it was...

I haven't named either of these, and I still haven't come up with an idea of what to do with them. I suppose there's always Esty...


I've also been making jewelry off and on. While we were at my friend's house the last two weekends, I made some necklaces for her. First off, I wore a wire-wrapped pendant I'd made on a leather cord. She took that one and had me shorten it for her!³ It's fun to see someone so excited to wear something that they take it from your hands and immediately put it on! 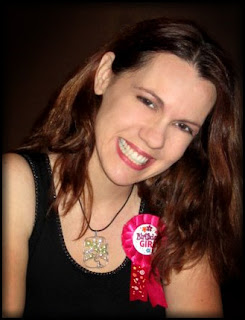 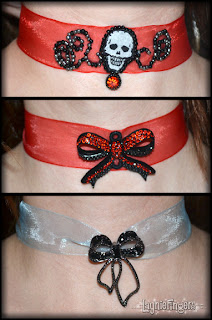 So yea, that's been my last few weeks. Every time I tried to paint my nails, it was a disaster, but I was able to make a few goodies. Go fibro, yea? :D
So tell me, what have you been doing the last few weeks? Do you have any hobbies you really enjoy? Share with me!

¹ Amigurumi is Japanese for "knitted stuffed toy." I don't know why people called crocheted toys amigurumi, but hey, I didn't make the name up. I just make the stuff!
² Seriously. What do you do when your yarn starts telling you what to do? I wasn't up for fighting my yarn, so I said sure, why not... and made an octopus. I didn't want to wake up with a mouth full of yarn, suffocating because I didn't listen!
³ Not really. I told her it was for her, and she didn't want to take it because I was wearing it to see if it was comfortable or not. Still, she did take it off my neck and have me resize the cord for her!
What I wouldn't give for an evil monkey sidekick...
See my disclosure statement for more information.
Posted at 1:14 AM 4 comments: Links to this post