I'm seeing spots! I call this one ElectroDots! 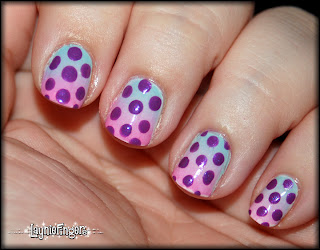 After wearing the pastel gradient for a day, I needed something else with a bit of graphic pop. I thought about zebra stripes, or a leopard print. I thought about plain stripes. But I decided to go with plain old polka dots.

Speaking of, have you ever wondered where the term polka dots originated? I'm a bit of a word geek, and decided to track it down the other day. Turns out, the dotted pattern was named for a dance called the polka in the 1850s. The dance was such a craze that there were lots of things named after it! It was that crazy pop music of the time, apparently. Call that your weird fact of the day. 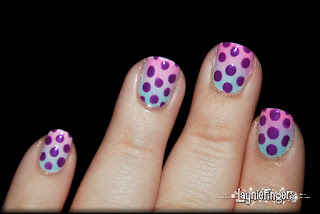 Unfortunately, my dots aren't nearly as neat as I'd hoped they would be. I'm still getting the hang of using my dotting tools again! Still, I'm really happy with these, and they look much better at normal viewing distance. (You know, when the camera isn't making my nails as big as my head!)

I chose Gothic Lolita from the Electropop collection because it went to perfectly with these colors. I promise I'm going to use some other colors eventually, but I love these so much! This was one giveaway prize I was thrilled to win, because these colors have my name all over them!

The process couldn't be more simple. I pulled out my palette (which is actually a packet of nail decals) and put a drop of Gothic Lolita onto it. Then I used my largest dotting tool to make dots on my nails. It's really super easy.

Now, you may find it hard to do a consistent pattern. I've struggled with that as well, so this is how I worked around it. I start with a dot in the center of my nail, then put one above it and below it (in a line). Then I go in between the dots to one side, and then to the other. I also try and put partial dots where they would be if they're going off the nail. That always makes things look nicer to me. I quick clean up with my brush and acetone and I'm ready to go! It ends up looking something like this.

Unfortunately, now that they're on, I'm strongly tempted to put small dots inside the big ones. I can never leave well enough alone, but how cute would little dots in the pastel colors look, with the purple framing them?

Sometimes my brain just won't stop tormenting me with ideas. It gets tiring!

Aah well, check back tomorrow to see what I've done with them. Who knows!

I only wish I got paid for every post I made using the China Glaze Electropop collection...
See my disclosure statement for more information.
Posted at 6:00 AM 2 comments: