This is something I will rarely do. I don't generally spend money on nail polish stuff. Because of that, I don't do haul posts. Even this time, I went for colors I can use in artsy stuff to round out my palette. Still, I got $50 from my dad for my birthday day-before-yesterday, and I spent a bit on me. Don't get me wrong, $20 went to fix my car's AC, because I live in hell South Louisiana, where the heat index has been reaching 110° or higher on a regular basis. AC is not a splurge, it's a necessity.

But then, my husband told me he wanted me to get something for myself, something to make me happy. (This is where everyone is supposed to smile and saw, "Awww, he's awesome!") So I did. I went digging through online coupons and things, and I decided to look for what I might be missing, and so... well... here we go. I took pictures.

First off, I was running low on remover & acetone, and you know how important those are! So, I grabbed one of each. The remover was $0.98, the acetone was $3.45 or so.

Then I went to look for the stickers I've been drooling over for months. Seriously, well before I started painting my nails, but alas, they were sold out.  No cute cupcake & crossbones decals for Laynie. =(

That's ok. In a way, it's better, because that leaves more room for polishes, and boy did I ever shop well for polish. Now, the two purple Wet n Wild polishes (Eggplant Frost and Wild Card) were from the other day, I just hadn't photographed them, so I stuck them in with the birthday haul. They were birthday, just not from Dad's contribution. I also decided to get the Carribean Frost because it's such a pretty teal, the Shield because OMG, it's a gorgeous sort of warm pewter color, and I'm always needing clear polish to mix with. All were $1 except Shield, which was $2. 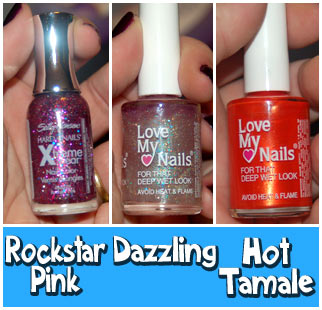 I also grabbed a couple of Love My Nails polishes, because hey, $1 polishes make me happy. I chose Hot Tamale because it's such a gorgeous, vibrant shimmery orange, and Dazzling because it's such an understated, purple/green shimmer. Seriously, it is insane, and it's so pretty!

Rockstar Pink was the biggest splurge of all, and it was from my actual birthday. I spent $2.50 on it, and it was worth every penny. It's a crazy glittertastic party, and I wouldn't change a bit of it. Well, I might make it a little easier to remove, but hey... it IS glitter, right?

And here's the fun part: I found a coupon at Walgreens online to get Sinful Colors polishes for $0.99. Be sure to double check if it's valid in your area, unfortunately it's not valid everywhere. There's a limit of three polishes per person, but that's why you bring a friend. I dragged my husband along and picked out six polishes that I think I am absolutely in LOVE with!

Happy Ending is a beautiful grassy green shimmer, Love Nails is an absolutely KILLER sky-blue shimmery/frost (not sure which), Let's Meet is a summery golden yellow shimmer, Dream On is the most impossible-to-photograph vibrant purple (almost fluorescent), All About You is a mix of gold and coppery glitters in a practically-clear base, and Call You Later is a crazy mix of multi-sized Green and Gold glitters in a practically-clear base.

And because that's not enough, I also got a nail art kit from the Dollar Tree because I have all sorts of strange ideas running through my mind for nail art, and lots of them involve little multicolor stones of some sort. it comes with 120 gems and a small bottle of top coat, and it, too, was $1.

If you've been keeping track, that's less than $20 spent today and less than $25 spent total. Not bad for 15 polishes, 120 rhinestones, a bottle of acetone, and a bottle of remover, yes? I'm giddy. I love getting a good deal! The only problem I have is...

While looking through the Poka Pika Nails blog, I saw that she'd gotten a set of Art Deco stamping plates. I was excited to see this, since I seem to be obsessed with nail stamping for some reason. I did a bit of digging and found the website for Art Deco Nails, but I wasn't able to actually view the site due to an error. The google site cache showed me I was on the right track, though. A few more minutes of searching and I found the Art Deco stamping items on Amazon.co.uk.

I'm a bit surprised, I have to admit. The image plates look like they've got the same images as the Konad plates. Can anyone confirm this, or does anyone know anything about these? They look to be at least as expensive as Konad stuff, if not a bit more! I was hoping for more images to choose from...
Posted at 12:18 AM 5 comments: