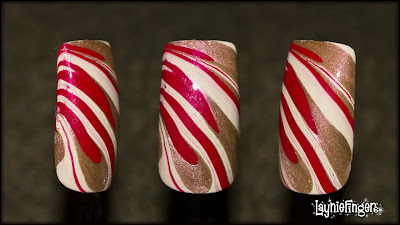 A while back I mentioned that I was finally figuring out how to water marble nails! I still haven't managed to do both hands with water marble, but I'm finally getting the concept down at least. Once I'd finished with today's design, I was struck by a couple of things: the colors were very traditionally Valentine's day to me, and the pattern reminded me of a candy cane for some reason. That's why this is a Valentine's Day Candy Cane Water Marble in July... because that's what it felt like!

If you like the look of this one, why not check out the video? It shows step by step how I achieved this look. Thanks for watching!

Some polishes may have been provided by the brand for consideration.
See my disclosure statement for more information.
Posted at 6:57 AM 1 comment:

Oops. I completely forgot to share my latest animated tutorial from YouTube. I'm starting a series of these, since people seem to be enjoying them. They're fast and easy to follow, and fun for times I haven't got something more complex recorded.

So tell me what your feelings are on these animated tutorials: Do you like them? Would you like to see more? Do they need music or a voice-over? Tell me what else you'd like to see!

Some polishes were provided by Jessica Cosmetics. I used them because they're gorgeous!
See my disclosure statement for more information.
Posted at 7:03 AM 1 comment: 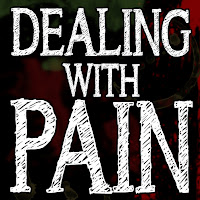 Blah, this has not been a fun week. Long story short, I was prescribed a new medication around 6 weeks ago, and I seem to be having negative reactions to it. You know, the kind that show up in the pamphlet that comes with your medication under the category "Contact your physician immediately."

That's always fun. Comes with lots of unpleasantness that doesn't need to be dragged out on the blog. Let's just say it sucked, we figured it out, and now I'm moving on.

However, whenever I make a post about fibromyalgia, I almost always get comments about how helpful people find my suggestions on coping with chronic pain. So, let's check back in for another installment of How Laynie Keeps From Pulling Her Hair Out From Chronic Pain, shall we?

YouTube tends to help me manage pain in several ways. There are art and craft tutorials that are inspiring, music videos that can transport me to a different mental place, and cat videos that are just... well, cat videos. Seriously, we all know what those are, right?

But there's another category of videos that can make me laugh and forget just how much I hurt. I may have mentioned this once or twice, but I absolutely LOVE babies. Happy babies, silly babies, toddler walks, baby laughs, chubby baby thighs and happy baby smiles. I am that lady who goes completely mental in the stores when she sees a cute baby, and will often have entire conversations with a pre-verbal baby. Yes, people stare sometimes, but I think most people understand what's going on, and if they don't? They should figure out how awesome babies are and join in the fun!! :D

So, in the spirit of sharing videos that help me get through painful times, enjoy this absolutely adorable baby. Yes, the videos are vertical, but the baby is worth it.

Man, I WISH someone would pay me for this post. ;)
See my disclosure statement for more information.
Posted at 3:33 AM 1 comment:

Acrylic Rainbow- a new take on an easy gradient 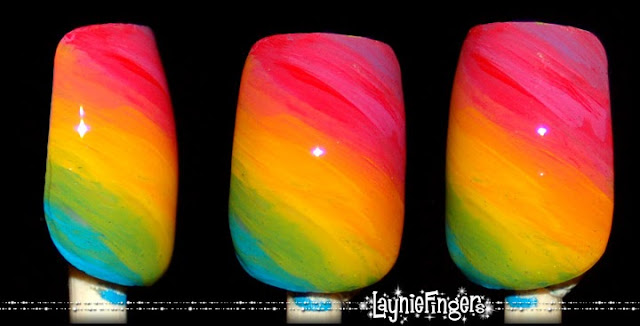 Hey, does anyone remember when I teased this photo, and said I was working on a video for it? Well, this is the finished nail from the video, and I absolutely love it! I FINALLY finished the darn thing, and maybe figured a bit more out about how to do some video editing. Whatever, I suck...

But it's READY! And it's EASY! Seriously, if you can brush back and forth, you can do this! And look at the finished product! They're filled with brush strokes and beautifully imperfect, so no matter what you do with it, it comes out gorgeous! 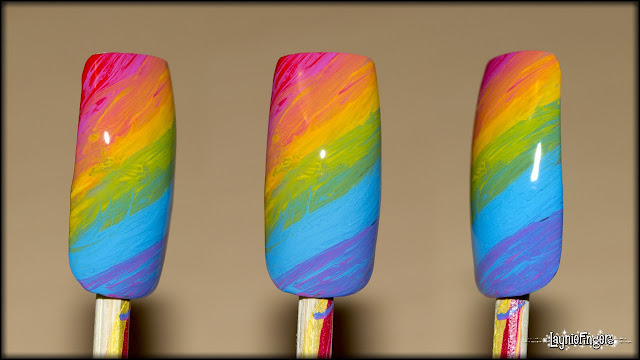 The video is right here, so if you'd like to learn how to do this, spend 5 minutes with me and see how it's done! If you like it, you can always subscribe, hit the thumbs up, tell your friends, whatever... it's all good. :D

Rainbows!! Color!! I'm such a child...
See my disclosure statement for more information.
Posted at 10:00 AM 3 comments: 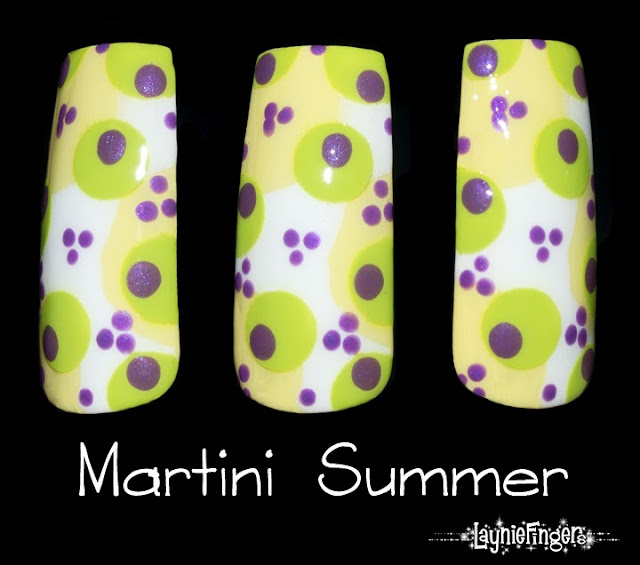 I'm not quite sure how I came up with this one. I wanted something with varying sizes of dots, and then I remembered the hole reinforcements I used to use in grade school. They weren't that great for their purpose, but they might be just what I needed for this look.

I dug through my polish boxes trying to decide what colors to use, and somehow picked out these four colors. I wasn't sure they'd work together, but I was willing to give it a try. I think it turned out nicely...

And since I didn't film a video of this experimentation, I put together an animated gif showing how I did this. The background is a bit backwards, because instead of painting a white nail and adding yellow dots, I did the opposite- I painted the nail yellow, then added my reinforcements and painted around the outside of them. Everything else was pretty straightforward.

Hope you enjoy it!

I so love lime green!
See my disclosure statement for more information.
Posted at 11:04 AM 4 comments: 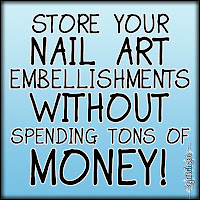 You know how sometimes you find a great deal on something, but then you realize you have to sort the items and place them into storage? My nail wheels arrived safely from Hong Kong, and I am absolutely thrilled with them. On the other hand, I spent something like 6 hours sorting rhinestones and studs, and that is... tedious, to say the least.

When I started sorting, I had no idea it would take me so long, but boy did it. I used a tray with raised sides to corral the various goodies, and I used my homemade rhinestone-picker-upper (for lack of a better term) (it's a bamboo skewer with a teeny bit of poster putty on the pointy end) to pick up each individual piece. Keep that in mind when you look at these next photos. 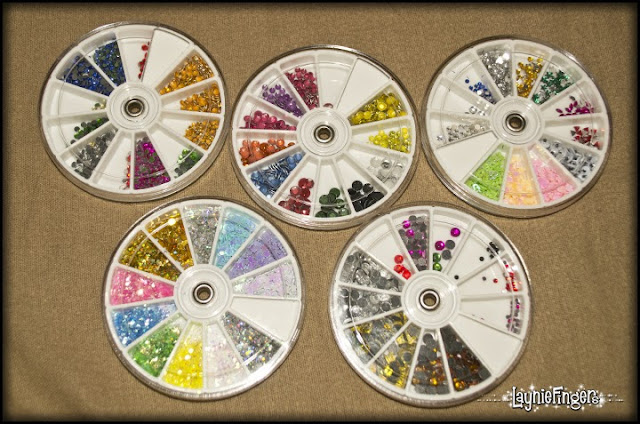 Now, I have to be honest- my recent splurge only filled three of these wheels. However, once I went to put them away, I realized that one set of nail gems that was in the original container had spilled once again into the box I keep it in. This is at least the third or fourth time it's happened, so I figured to heck with it, I'd put them into my empty wheels.

Once I'd finished that, I realized I had several bottles of the Donna Michelle nail art embellishments that just didn't store well and were a nightmare to try and use as they were. So yes, I added them into the nail wheels as well. Once I was finished, I'd filled all 5 wheels and I realized that I want to buy more- at least 10, maybe 20. I figure they won't stay empty for long! So, feast your eyes on my newly-organized goodies!


So, to sum up, I managed to get some wonderful, compact, usable storage for a whopping $3.70 and now most of my nail art embellishments are stored in a way that they're both easily accessible and easily viewed. I am SO in love!

If you're interested in picking up some of these nail wheels, you can take advantage of the same deal I did- you can get 5 brand new, unused nail art storage wheels for approximately $3.70 US dollars. It does take a while for them to arrive, but you aren't paying for shipping, so it's hard to complain.

Next time, I'll be sharing a nail design I called Martini Summer. You don't want to miss this one, so stick around!

I love finding good deals on eBay!
See my disclosure statement for more information.
Posted at 2:25 AM 3 comments: