Nail Art Mockups In My Sketchbook

Eek! This was supposed to post and didn't. I'm going to backdate it and put it up anyway. Sorry for the weirdness you may have to deal with!

I've kept a sketchbook for years. It goes back to when I was in art school. Those teachers made us buy a sketchbook every semester, the fancy hard-back kind with the special paper inside. I was always so intimidated by those books that it was too hard to let go and let myself doodle in them. We didn't have a lot of money back then, so the idea of spending $25 on a sketchbook to doodle in and goof off? It felt like sacrilege! Hardback sketchbooks deserved actual art on their pages, things that were more finished. My poor doodles and scribbles felt as if I was defacing the pages instead of building my skills! 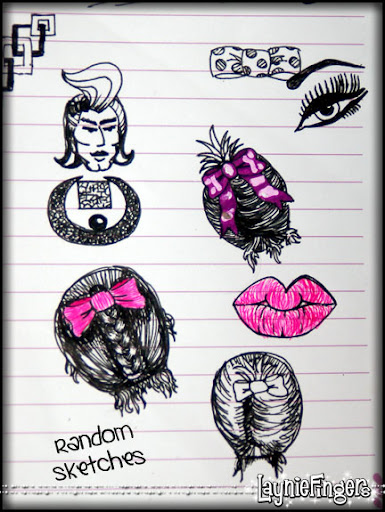 Even now, 12 years later, most of those books are mostly empty. I still feel weird putting my strange rambles and doodles into them, because it feels like my scribblings aren't worthy of such a quality book. The good news is that I've found a way around that idea. Instead of using the giant, expensive sketchbooks I go to Office Depot or one of the big-box stores and get cheap notebooks. Some have unlined paper, some have lined paper, some even have graph paper! Because they're so inexpensive, I can write grocery lists or poetry on them, I can sketch things that are bizarre and silly. They're my sketchbooks, and I'd be lost without them. 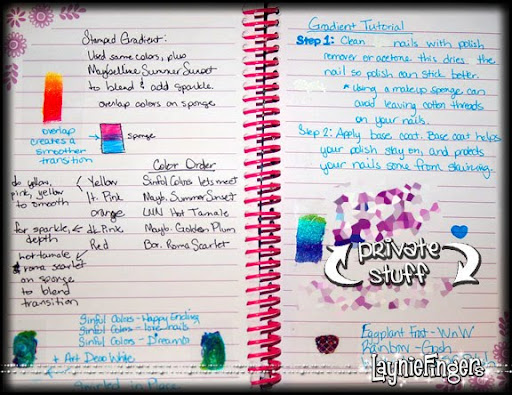 I don't just sketch in them. There are lists of things to do, ideas for stories, ideas for nail art,  character studies. I'll list quotes from the moment, observations from daily life, descriptions of events that made me laugh. Sometimes I'll jot down funny things that happened to me along with a sketch to convey information. It's a small, working record of my life, both creative and not, that I can flip through for inspiration for for reminders to do things I need to do.

One thing I've recently started doing is creating mock-ups of nail art designs. My sketchbook works perfectly for this, since the nail polish doesn't seep through the page. It sits nicely on top, dries quickly, and creates a permanent record of nail art inspiration for me! I'll also jot down where the idea came from, like in this picture to the right. Luxuriousnails on youtube does wonderful nail art. Check her out! 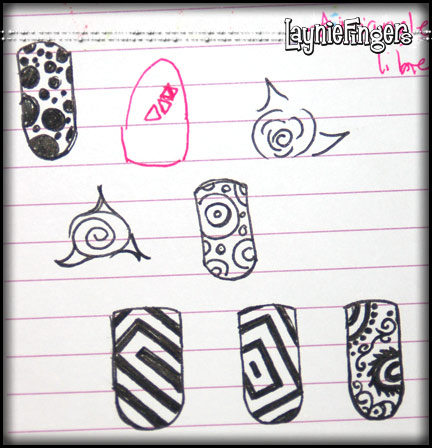 Not all of my nail art mock-ups are done with nail polish, though. Sometimes I'll be sitting and doodling, playing with variations on a theme. In this photo, I was playing with variations on bold graphic visual elements, like concentric squares and varying sizes of circles. I very much enjoy bold elements like these, although repeating them with nail polish can be quite a chore. I have plans to try out my gel pens with a pale polish, or my opaque gel pens with a darker polish. I love the idea of neons on black... I think neon bubbles on black could be lots of fun!

I have more pics after the jump...