Have you ever had one of those days where suddenly, you're inspired to do stuff? Yea, this has been one of those. Well, yesterday was, I suppose. Last night around 7pm I had an idea- I could work on a few things to put into my husband's RedBubble store! I'd done an image years ago that I used as an icon on LiveJournal that I fell in love with, so I figured I'd start with that.

I didn't stop. It took me a good hour and a half of hunting through fonts, more fonts than I could even keep track of. I was hoping to find the font I'd used 10 years ago and somehow lost track of...

Would you believe I actually found it? I could barely believe it, but I was VERY happy! Then it was a matter of tweaking and kerning and fiddling, changing the letter shape for the one letter I didn't like the look of. I'm a bit neurotic when it comes to text. :D 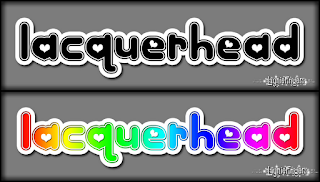 Then I started thinking about nails, and how they could translate to RedBubble. I've got the start of some fun stuff to share.  First is a sticker that I think would go well lots of places. It comes in black or in rainbow, because let's be honest- this is me we're talking about!

EDIT: Stickers are down for the moment til I tweak them to be exactly the way I want them. Too much white space as it is right now!

I fussed with this for probably entirely too long, including tweaking the tail of the Q in lacquerhead to face the opposite direction. What can I say, when I want something to look a certain way, I want it to look just the way I want it. I'm neurotic, and I own that. :D 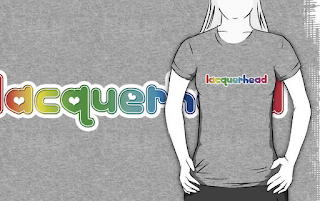 You can also get that rainbow lacquerhead on a shirt or a hoodie in your choice of about a bazillion colors (or like, 12 or something... )! I won't lie, I'm itching to get one of these for myself. Soon!

So yea, I've been buried in design for the last... erm, 12 hours. I think I should go to sleep now. But go look, and if you like them, share the links with your friends!