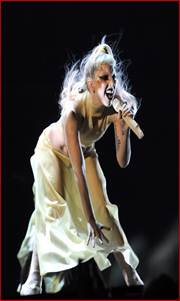 Wow. Did you watch the Grammys last night? I have do admit that Lady Gaga is one of my favorite performers, and last night she showed why. She debuted her new song "Born This Way" and absolutely blew me away, as usual. That voice is unreal, and I love the way she uses it. No oversinging, no trying to disguise a lack of talent with the ever-present autotune.

Last night, Gaga's performance began with an egg that was carried down the red carpet by four scantily-clad muscular men, and watched over by her supermodel "nurse." Gaga's publicist had said on twitter that she was "in incubation," and on the red carpet that "nurse" said Gaga was in a "creative embryonic stage and won't be born until her performance this evening." 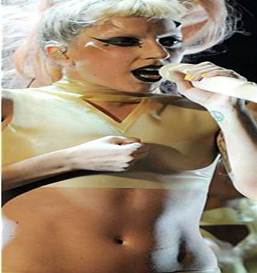 Later, that egg was rolled onto stage on large carriage wheels, where Gaga emerged in a buttery yellow ensemble. She then launched into her new song, accompanied onstage by her dancers. It was a hell of a show, and ended with a visually stunning image of Gaga and her dancers, all with one hand up in the air. To me, it spoke of solidarity, of acceptance. "We were born this way, and you were too. We stand together, for us, for you, for them..."

What can I say, it moved me. I love the message of acceptance, the idea of supporting people as they are instead of ask them to fit into some cookie cutter mold of society's choosing. I guess it's obvious that Lady Gaga is one of my favorite artists...

Also as usual, she was wearing Deborah Lippmann polish on her nails. Last night's creation was a stunning yellow polish called "Yellow Brick Road," and I for one cannot wait to get my hands on this polish. Yellows are known for being difficult to work with, so I'm hoping this one performs as well as the rest of the Lippmann polishes I've worn. If it's even half as nice as the rest, it's gonna be a showstopper.

So what do you think? Is this a yellow you'd wear, or is this just a bit too far out there for you?

Images were provided by Deborah Lippmann's PR.
See my disclosure statement for more information.
Posted at 5:13 PM 1 comment: Links to this post