This glitterbomb needs a name!

Ok, it's official. I'm over my dislike of bar glitter, at least for this particular application. I've said more than once that I don't really like bar glitter, mainly because it looks like your nails are hairy.

Then a polish came along to change my mind a bit- OPI's Save Me from the Nicki Minaj collection. I don't know why, but the little strings of holographic glitter worked for me in this one.

I kept seeing it every time I went to the local big box store, because the salon inside it sells OPI. But I'm cheap, and I'm broke. I didn't want to buy it if I didn't have to...

I kept wishing and wanting, and thinking I could do this myself. I won a contest from Viva la Nails and got some holographic bar glitter, thinking it would come in handy to franken my own... and then last night the final piece fell into place. 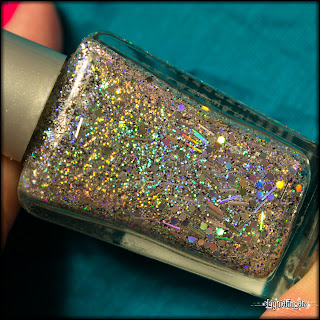 My husband wanted to stop by the Dollar Tree to grab a couple of things, and as usual my first stop was cosmetics. Sure enough, there was a nice selection of Sally Hansen polishes in the two-for-one blister packs! I picked up a couple, including Twinkle Twinkle in Xtreme Wear. It had the large hex holo glitter as well as the base silver I wanted.

I used a bottle of clear Wet n Wild polish for the base. I added a healthy blob of Twinkle Twinkle as well as some Chin Glaze Techno, then added a lot of the string glitter. Finally, I added some small holo glitter I bought literally 16 years ago for a crazy Mardi Gras. I threw in a couple of balls from TKB trading and shook like I was trying to dance in the 80s...

This is the result.

The only problem is that something this spectacular needs a name. I'm at a loss for words, so why not leave me a comment suggesting something?

Magpie, me? Whatever makes you say that...
See my disclosure statement for more information.
Posted at 6:40 AM 12 comments: