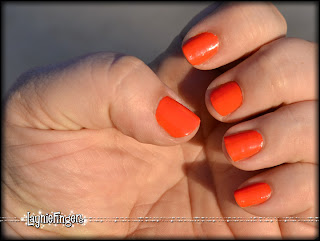 Let's be honest here... I've never worn a fluorescent polish. I know, it's strange, but I've never had one I thought would look good on me. I did win a couple of fluorescent yellows a while back, but...  let's just say they're still in my untrieds box.

Then I got Lara's Theme. It doesn't hurt that I've really been enjoying orange as a color lately, or that this particular orange is almost fluorescent, but not quite. It probably helped that it also looked like it just might look decent with my skin tone. 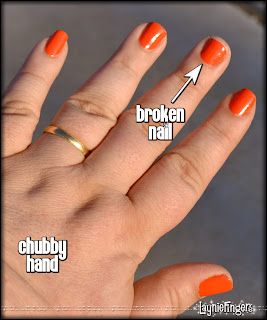 Whatever the reason, I tried this the same day I got it. That's downright unheard of for me. Usually I'll wait a bit, or work through some more untrieds first, but this one absolutely called my name. What can I say, it's gorgeous!!

However, even though this polish is absolutely juicy-looking, it was a bit of a pain to work with. I'm assuming this is because it's a fluorescent (ok, how many times will I type the word fluorescent in this post?), but still I was swearing a bit by the time I was done. I think a good coat of Seche Vite would have helped loads, but I was out at the time.

Lara's Theme was very streaky for me, which is a first for Deborah Lippmann polishes. Normally they go on like butter, but this one was grumpy. Still, it was tolerable after two coats, so I don't think it's worth much complaining! 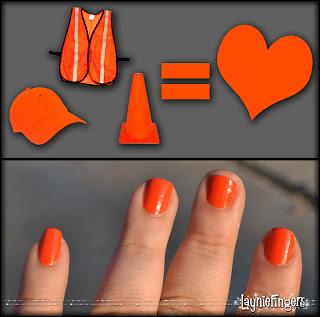 It's funny to me, because while I wore this (for either four or five days, I don't quite remember!) I would find myself looking for things to compare it to. I think I found several good comparisons! It's the orange of traffic cones, of hunters' caps, of traffic workers' vests. In shot, this baby is VISIBLE!

After a few days, though, I got bored as I normally do. I decided to pull out my China Glaze crackle polishes...

... but that's a story for next time! Til then, you'll have to be content with this video!

Lara's Theme was provided by the manufacturer for consideration.
See my disclosure statement for more information.
Posted at 8:28 AM 4 comments: Links to this post