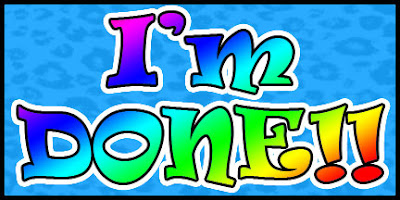 I know I just posted. Deal with it. I'm so giddy... I've finally replaced all the broken photos in my blog! I was so sad because every image on my blog prior to October 1 got broken, even my blog header. I've been trying to replace them since then, but it's a tedious job.

Finally, I hit post on the last entry! I didn't even realize it was the last one, so it was even more exciting to see that all the next posts had their photos! I'm telling you, if I could I'd be dancing right now!

So, here's hoping you all have as great an evening as I have!

Blah blah was provided by the manufacturer for consideration.
See my disclosure statement for more information.
Posted at 8:24 PM 1 comment:

What I Did On Thursday, as told in pictures.

I did a silly thing today. I've been seriously fighting with pain for the last five or six days, and it's starting to get to me. So, instead of taking photos, I realized that although I have information for a blog post, I had absolutely NO images to share with it. However, my husband came to the rescue. He suggested I draw the photos for the post, and so I will now share my day with you. 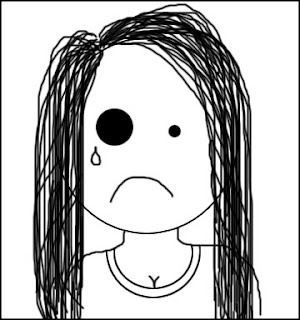 This morning started out with tears, unfortunately. I've been having a lot of problems with my fibro because of a "perfect storm" of issues: my overdoing at the animation festival that happened over the weekend, the weather's jumping back and forth between hot and cold, and the fact that I seem to be coming down with a cold. Any of those have the potential to cause my fibro pain to flare up. Combined, it's been a heck of a week.

So, I've been running through my entire arsenal of pain management techniques: heat (warm baths, hot towels, heating pad, etc), stretching, exercise, massage, and of course my prescription medication. Even so, I've had several moments that were literally moment-by-moment, reminding myself that it will not last forever, and I am strong enough to push through this and let the pain do its thing.

I've been through this before, only I didn't have such a wonderful team for pain management, nor did I have the surety that the pain would ease eventually. Even though I get a bit wibbly now when things get bad, I still know that it's temporary and my doctors are only a phone call away. I'm lucky that way, and I cannot say enough good things about the support network I have. (That includes you guys reading this, too, for your information!) 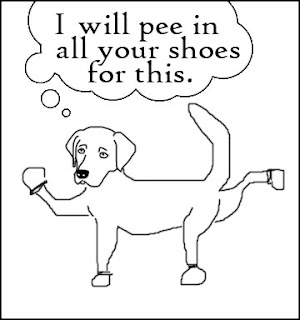 So, as a way of trying to cope with the feeling that my body was trying to turn itself inside out, I turned to my favorite distraction- YouTube. I watched videos of Maru (the cutest cat on the internet), of SMBC theater (a crazy sketch comedy group by the guy who writes Saturday Morning Breakfast Cereal), and videos of bronze and aluminum smelting.

But best of all, I watched something that made me almost cry with laughter. I watched videos of dogs wearing boots. Dogs don't like to wear boots, at least not at first. Sometimes they just stand still, sometimes they look at their owners as if questioning why they would be so cruel.

But sometimes they become acrobatic, kicking their feet up and shaking as if trying to dislodge the infernal demon latched on to their feet. They kick and jump and hop, whimper and moan, acting as if they're going to die if their feet don't get free. Then they begin to gallop, feet flailing wildly, and I consistently lose my shit every single time.

I laugh. Frankly, I'm not the only one. My friends have been sending me links to help distract me, and I think I received the link to Ally Brosh's latest Hyperbole and a Half entry at least six times. You have never seen laughing the way I laughed when I read this. I laughed until I cried, until I hurt, until nothing came out except a pathetic little wheeze as I tried futilely to refill my lungs. People, I almost passed out from reading this post. If you never click another link in my blog, please... click that link, and read about Ally moving, and her poor stupid dog who became a perpetual motion vomit machine. There are no words for how funny this is. 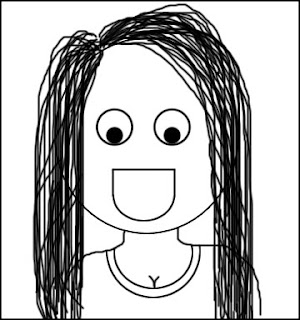 Thankfully, my pain broke around 3:30pm. I went from curled up and crying to smiling again, because let's be honest... things have to be pretty bad for me not to smile. Going from extreme pain to less pain is always a good thing too. So obviously, I felt a lot better once things started easing up. 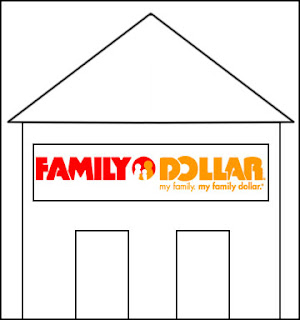 But on the way, we stopped to walk a bit. I've been wanting to go to Family Dollar and see if they have any interesting cosmetics. No big deal, class didn't start til 6pm, so we had time to wander.

So, we get out, start to wander. We walked through the Christmas department which had some really cute stuff. I also wend through the stationery/arts and crafts section because I'm really looking for some glitter to use for various nail designs.

Have you noticed that it's getting harder and harder to find glitter these days? It used to be you could find glitter everywhere, from 7-11 to the big box stores. Now, though, all you find is glitter glue. I assume it's neater, but it doesn't do me any good! Hmmph. 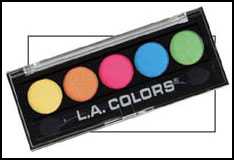 Ah well, I digress. If you're a regular reader, you know I do that often. I meandered to the cosmetics department and suddenly perked up- holy mackerel, there was a lot of cute stuff here! There was a large selection of LA Colors products, including the palette to the right for a grand total of $1.50! Do you have any idea how hard it was to walk away from that??

There were also a variety of other LA Colors cosmetics, artificial nails (did you know LA Colors makes fake nails? I didn't!), and nail polishes out the wazoo. I was good, I'm still trying to mostly adhere to my no-buy (except for the Christmas/Hannukah stuff I bought the other day), but one thing caught my attention and I simply couldn't resist. I found the cutest set of decals by Fing'rs, and I'd never seen this particular sheet before. 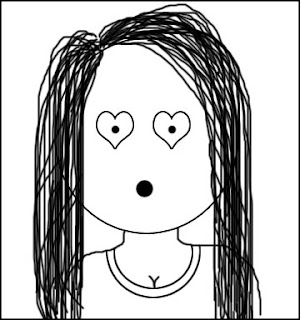 Yes, my friends, it's another monkey & penguin set of decals!! Best part- it was $1!

I'm sure you can imagine what happened. First, I picked it up, surprised. It's actually a pretty big sheet, and it doesn't have all the other decals I didn't particularly want from the other similar set with these decals. (Can we say cheerleading, anyone? I'm almost 40, here!)

I put them back. I really did. I was trying SO HARD to be good... but no. The penguins sang their siren song to me and I was unable to fight it, unable to resist their pull... 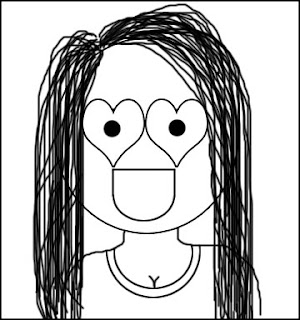 That's right. Mama has new penguins now. Kind of amusing, since I'm still hoarding the first set. Maybe now I'll be brave enough to use them? Or maybe they'll go into my stash and only come out to be admired, like now. Who knows?

Whatever. I'm ok with it. I like just having them. Unfortunately, as we got back into the car, I realized that I had no photos of them, no camera to take a photo, no scanner to scan them with. This is when my husband suggested that I hop on the computer in his class and draw the pics to let you know about my adventures today.

I had to agree with him that it was a good idea. I like to draw, even if I'm not particularly good at it. Let's be honest... sometimes simple images illustrate a story better than complex ones! 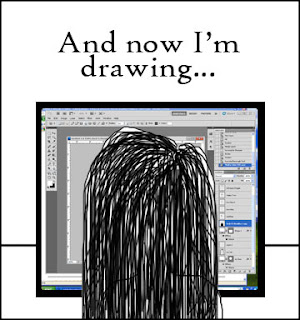 And that brings us to where I am now- sitting in the computer lab, writing and drawing. What started as a crappy day has turned into a pretty nice one. I'm happy, I'm hurting less, and I've drawn lots of silly pictures. I can deal with that!

As for my nails, I've been wearing BPAL's Madame Moriarty. I can't even begin to tell you how much I love this color... a deep bloody red that's got a touch of jelly sheerness to it. I've been getting compliments on it right and left too, and it wears like iron! Definitely one of my favorite polishes ever.

BPAL's Madame Moriarty was provided by the manufacturer for consideration.
See my disclosure statement for more information.
Posted at 6:43 PM 6 comments: