OMFGPonies and Pengins, does it get any better than this?

I have to be honest here. I intended to post this earlier- maybe Saturday morning? I've lost track of time, thanks to the chest cold of doom that's descended upon our home. I've spent too much time hacking and coughing, wondering if I have the energy to cough again. And all this while, the penguin photos have been waiting for me. 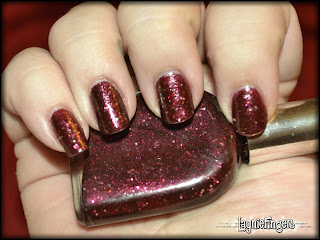 It all started with me deciding I had to wear OMFGPonies and see what it looked like on my nails. It was a bit thick to start out with, so I thinned it with a few (maybe 10?) drops of polish thinner, and then it was absolutely dreamy!

Also, I apologize because I'm going to be sharing a few more photos than usual with this one. I'm sort of in love with it!! Also, I gave up on getting video of it, mainly because it would involve spending half an hour outside in weather that feels like it's 115 degrees so that my camera can adjust to the ambient temperature. Otherwise, the lens just fogs up and makes it impossible to take pictures. 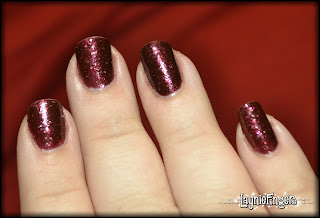 One thing I didn't expect with OMFGPonies is the ending finish: it turned out to have a matte texture that really surprised me! It was easily remedied with a coat of Seche Vite, but I would have preferred a glossier finish. Ah well, not a huge deal.

One thing I didn't think about but was obvious in retrospect was the difficulty that occurred during cleanup. Big glitter = messy cleanup. Overall it wasn't too hard to clean up, but I definitely ended up with some glitter spots that made my cuticles look a bit messy. 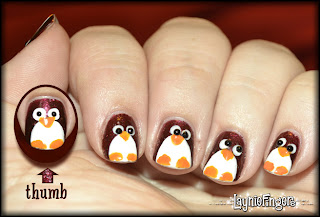 After wearing OMFGPonies for a day, I realized I wanted some nail art. I don't know what prompted me to make red glitter penguins, but I really like them! Turns out they were simple to do, although they were a bit on the fussy side. Still, even my husband loves these!

While it never occurred to me to wear red glitter penguins, I'm glad I did because they make me giggle every time I see them! I'm also really happy with the positions of their eyes, and everyone who has seen them has commented on that as well!

So- how do you make them? I thought you'd never ask!

and if you can't follow the how-to because it's upside down, I did a special one just for you!

Keep in mind that you can do lots of expressive things with the eyes. Keep the white parts small and the eyes will be tiny and cute, or make them HUGE and they'll still be adorable! Just look at the different expressions I've given this little guy, just by changing the position and size of the whites and blacks of his eyes! 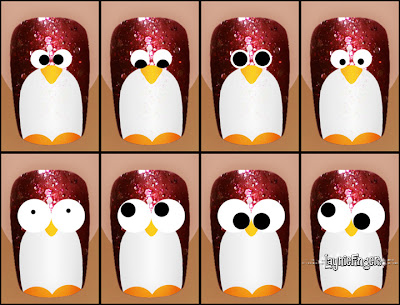 As always, feel free to show me what you've done if I've inspired you at all. I love sharing with people, and feedback makes me smile for HOURS! :D
Til next time!
EDIT: I cannot believe I forgot to include this image. It's only the first image I edited, and the one I sent to my friends to make them giggle. Yea, I'm forgetful... it's what happens when you get old! Anyway, enjoy! 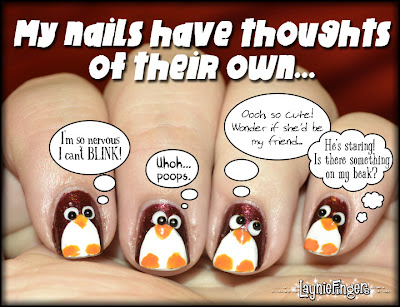 The penguins have eaten  my brain, it's true!
See my disclosure statement for more information.
Posted at 5:23 AM 11 comments: