Tiger Stripes- They're Fun When You Throw In A Gradient! 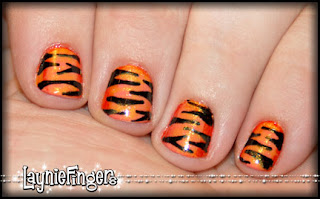 Let's be honest- animal prints are fun. They're especially fun for nail art, but they can seem a bit flat-looking sometimes. I decided I was going to try to do a tiger print with a bit of depth to it!

I started out with my standard base coat, then two coats of Love My Nails Hot Tamale. This is a gorgeous orange that's absolutely loaded with shimmer. I wanted a bit more, though, so I mixed it with a bit of white polish. Oddly enough, it turned pink! I wish I'd gotten pictures of that stage, but I wasn't thinking. Instead, I added some Sinful Colors Let's Meet (Yellow) to warm that pink up to a pale orange again.

Once I had a pale orange I was happy with, I sponged it lightly over the center high part of my nails. It ended up being a sort-of blended pale stripe down the centers. It still seemed too white/pink for me, so I ended up painting a coat of Let's Meet over my nails to make everything work together. At this point, it was late and I seriously needed sleep, so I added a coat of Seche Vite and let it dry for a bit, then went to sleep. 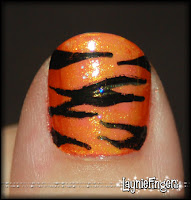 The next morning, I had to go run some errands, and didn't realize until I was already out of the house that I had odd nails that I hadn't even cleaned up edges on! Thankfully, I don't think anyone noticed. If they did, they probably thought I was insane! My nails looked weird! But that's ok... if they got a giggle, then maybe their day got a little brighter. I'm ok with that!

So, once I got home, I pulled out my Sally Hansen Nail Art pens, choosing the black for the tiger stripes. It was a simple matter to draw on stripes, and my biggest challenge was not drawing too many stripes! I added another coat of Seche Vite, then looked at them. They were pretty, but something was missing... 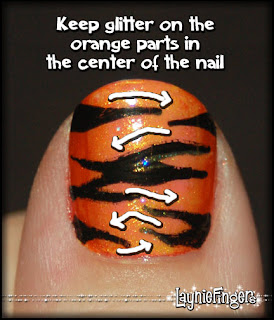 My basic rule of thumb is this: when in doubt, add glitter! In this case, it worked splendidly! Instead of brushing glitter over the entire nail, though, I wanted to enhance the light parts of the nail. I ended up using a very thin nail art brush to paint the glitter polish onto the appropriate areas.

Sounds fiddly, doesn't it? Oh yea. You could say that. First I painted on a layer of Love My Nails Dazzling (my go-to glitter of choice). It was pretty, but it wasn't enough. So, I pulled out my Sinful Colors Call You Later. This stuff is seriously gorgeous, a mix of gold and copper glitters in multiple sizes that absolutely sings on the nail. It turned out to be the absolute perfect addition, and once I was finished with the glitters I couldn't help but smile. 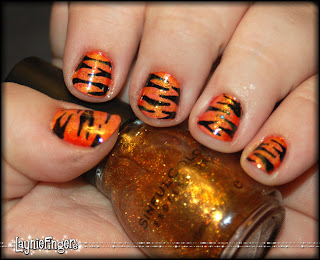 Once I got those applied I added one more coat of Seche Vite. (I hope you aren't counting, but basically, that's a lot.) Believe it or not, it dried fairly quickly and was super smooth even with all the glitter. I did a quick cleanup with my acetone & paintbrush and then I wasn't ashamed to leave the house anymore!

Even my husband seemed amused by this manicure. I showed him my nails and he said, "Awww, you're a kitty!" It made me smile.
Normally he just sort of shrugs and says, "Ew, stinky." To get a positive reaction makes me happy!

So tell me, what do you think about animal prints. Do you like them? Do you love them even more in rainbow colors? Are you a purist who thinks animal prints belong only on the animals who wear them? Tell me all about it in the comments!


Sally Hansen Nail Art Pen was provided by the company for evaluation.
Posted at 5:22 AM 6 comments: