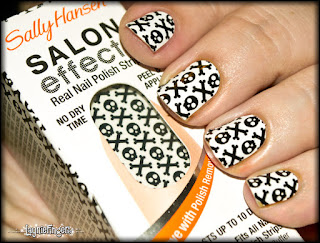 Hi there! Rumors of my death have been greatly exaggerated! I've been sick for entirely too long this time, but after lots of antibiotics and incredible amounts of rest, I'm finally feeling like a human being! Thanks to this, I can show you a couple of items that I want you to see before Halloween is over with!

If you're like me, you want to do fun Halloween nails to go with your costume, even if your costume is simple. Sally Hansen has just the solution for you! The ones I'm wearing in this image are called Numbskull, and they're just the cutest little skulls and crossbones!

There's one thing that I really dislike about these, although it's a small thing. The pattern is unidirectional, meaning it only goes in one direction. This means that if you happen to use both ends of the strips, you're left with skulls facing in two directions! I'm neurotic enough that this does bother me, although at a glance they look perfectly fine. 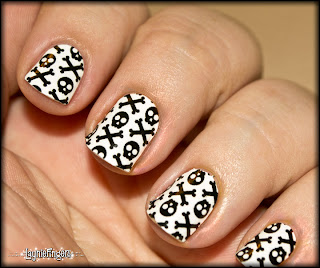 I also learned something else about these strips. When I applied them last night, I had sections of the strips that weren't actually sticking to my nails worth a darn, and I was sure they'd be peeling by morning. However, I pressed everything down as best I could and went on to bed. Once I woke up, I found that they'd settled down and are now solidly adhered to all my nails!

So don't worry if they aren't perfectly adhered right at first. They will settle down! Just press them down as well as you can and leave them alone for a few hours.

Overall, I really like this design. I also think it would be lots of fun as accent nails, or trimmed down to use as french tips. The little skulls are so cute!

Also, have I mentioned these strips tend to wear like iron? If you haven't read it, you can see my wear test for these starting here, where I rave about how amazing they are. I wound up finally removing the strips after 15 days of wear, and the only problem with them was a chip at the tip of one nail where I'd broken it!

Sally Hansen Salon Effects in Numbskull was provided by the brand for consideration.
See my disclosure statement for more information.
Posted at 2:41 PM 1 comment: