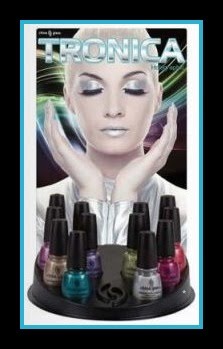 Oh my goodness, y'all... Erin from Persistently Polished was lucky enough to find a shop selling the China Glaze Tronica collection, so she posted some wonderful swatches of them for us! I am absolutely drooling over this set of polishes, and unfortunately I'm on a no-buy for the foreseeable future. I can look at swatches, though, and think to myself how pretty they are!

They seem to be less holographic than the OMG collection. That could be a plus for some people, but it makes me feel less sad about not being able to buy them. Anyway, I totally think you should scoot over to Persistently Polished and check out those swatches!

Oh dear... That didn't work out like I hoped it would. 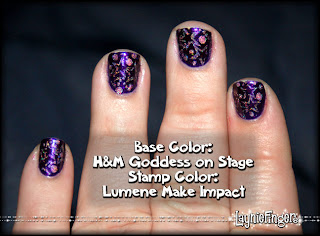 I told you yesterday I'd share the Konadicure I did on top of H&M's Goddess On Stage. I didn't say it would be pretty, unfortunately...

I had the best intentions, as usual. I wanted to brighten up the deep tones of the purple base coat, and I thought that gorgeous new pink holographic polish I won from Scandalously Polished would be perfect for the task. Pink goes with purple, I thought to myself, and I like holographic polishes. This should be GREAT! 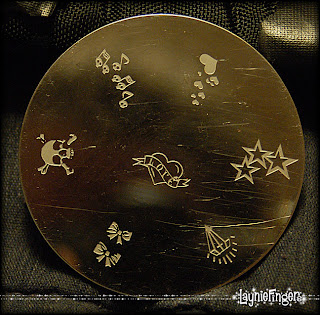 I had such high hopes. I pulled out my stamping set and flipped through the plates, trying to decide what look to go for. I'm not a floral person, but my plates have an absolute TON of flowers. I'm starting to figure out ways to use them that I like, though that's a totally different blog post. For this one, though, I settled on the Hot Topic fauxnad plate with the stars. I thought they'd be cute in pink.

I then grabbed my Lumene Natural Code Nail Styler in 11 Make Impact. Instead of going for a straight-across look with the stars, placing them in the same place on each nail, I decided to place them "randomly" on my nails, trying to make everything look cute depending on the amount of space available on the individual nails. This wasn't a bad idea, exactly, but it just didn't look right. Somehow, it didn't look like there was a finished design on my nails. Instead, it looked like I had random crap stamped onto them. 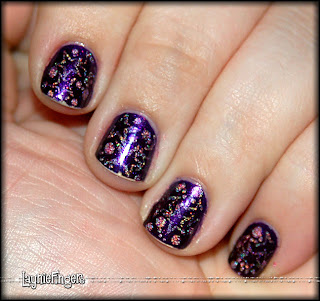 What to do? I decided maybe dots would help fill in some of the space, and make things look more... I don't know. More like a cohesive design, instead of just random crap on my nails, I guess.

See, I have a problem. I'm a bit of a perfectionist. While I see other people's stamped nails and think they're adorable, I can't help but see every tiny flaw in my own stamped designs. I end up hating almost every stamped design I do.

So I pulled out my new dotting tools and set to work. I applied some big dots first to fill in the negative space, but that didn't help. Instead, I had pale stars surrounded by bright freakin' pink dots. Oh yea, that's attractive.

So I added some smaller dots. I did some randomly, others in small curved trails around the stars. And the more I added, the busier it got, and the uglier it got. I couldn't figure out what else to do with it, so I said to heck with it, added topcoat, and called it a day. Then I went on Twitter and complained that I think Konad just isn't for me. :D

Now, looking at the photos, it doesn't look as bad. But trust me on this one... somehow, the photos don't capture the not-quite-rightness of this one. I was very, very happy to take my polish off and try another manicure. Of course, that one made me cuss too, but in the end I was happy with things...