Broadway Nail Dress with a twist, and an explanation of where I've been

Wow, two posts in one day! This might become a habit again! Consider this a sign of improvement!

Some of you may know that I've got fibromyalgia (along with a few other weird-but-not-deadly issues), and that I end up seeing a lot of doctors. Because my fibro pain got to such a debilitating point,  I eventually started going to a chronic pain management clinic. Hands down, it's the best decision I ever made, and one of the hardest ones.

Like many other people, I had the wrong idea about what a pain management clinic was. I imagined it to be basically a place to go get pain pills, and that's not what I wanted. Overall, I wanted to manage my pain, lessen it, but I didn't want to commit myself to expensive drugs and narcotics and who knows what. I was terrified I'd become an addict, that people would know what I was doing and look down on me for it.

Then my pain got to the point I couldn't function anymore. Couldn't dress myself without assistance, couldn't take a bath without help, couldn't cook dinner. I fight really hard not to whine too much and try not to bring people down, but I reached a point where I realized that frankly, life as an addict would be better than what I was going through and I had nothing left to lose. I called the clinic my general practitioner recommended.

Imagine my surprise when I found out that no- they don't like handing out pills any more than I like taking them. They've supported my choices to experiment with exercise, diet changes, weight changes. They've given me medication to control the pain when I need it, and have helped me taper off the meds now that I don't. And suddenly, I'm living in a world where even though I'm seriously out of shape and some days I hurt too much to do things, I have more days when I don't hurt too much to laugh with my family, or go on a picnic, or just snuggle in bed while we watch a movie.

Those things? For me, those are what make life good. They're the important things. The rest of it's just stuff, you know?

So- why have I been gone the last few weeks? Long story short, I've been taking methadone for pain management for about 2 years now. It worked, it was cheap, and since I don't have insurance it was the best option at the time. And now that my pain has improved, I've been very slowly tapering down for 5 or 6 months. Finally, I took my last dose 2 weeks ago, and it was so incredibly momentous...

... and crappy. Did I mention crappy? Yea, it's improving now, but after having taken this daily for 2 years, it wasn't a fun process. Add to it a bad reaction to an anxiety med I'd started the week before and I spent a few weeks pretty depressed and miserable.

However, it's improving, so I'm excited about that! I'm getting excited about life again, which feels absolutely amazing, and as a result, I'm hoping some of this will spill over into blogville. Keep an eye peeled, things might get fun soon!

Anyway, the reason I wanted to share the talk about doctors is because a funny thing has happened! My team at the pain management clinic have gotten to know me over the past couple of years, and now whenever I go in, several people will come up to me wanting to see what fun nail art I'm wearing! Some of them even read this blog! (Hi!! *hugs*) It's a wonderful feeling, knowing that even though I may be having a rough time, I can still bring a little bit of happy into their lives, so I find myself thinking about what I'm going to wear on my nails before every appointment! 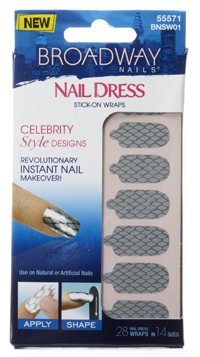 For my last appointment, I wanted something fun and festive, but also sort of understated. (Ok, understated for me. Deal with it!) Also, I was feeling pretty gross so I didn't have a ton of energy to spend on my nails. So, I decided to break into a pack of Broadway Nail Dress sticker-thingies. Also, since I wanted a bit more flash, I decided to add some crystals from a limited-edition packet of Kiss Nail Art Paint. If I'm not mistaken, some of the kits still come with the sheet of french manicure guides and rhinestones- just check the back of the box when you get them.

Ok, enough blabbing about that... There's not a lot to say about applying these. They're different from the nail polish appliques like Sally Hansen Salon Effects and Incoco strips. I'm not sure what these are made of, but they're almost like a plastic film. They don't seem to stretch as well as the nail polish strips, but they're not harder to put on. It's simply a matter of select a strip that looks just a bit wider than your nail, pull it from the paper, line it up with your cuticle, and apply.

However, I do have one tip for application. When they show the nail file going straight down at the end of your fingernail, they do mean straight down. If you let it go at all toward your cuticle, you will end up with a tiny streak of bare nail at your fingertip. It's not pretty, so be very aware of how you're holding the emery board to remove the extra. Go slow and it should work out fine.

Once they were all on, I decided to add a bit of bling with the rhinestones. Since this pattern reminded me of netting, I decided to put a crystal at each joining. I started with a larger one sort of in the center, and then as I worked my way out, I used gradually smaller stones. 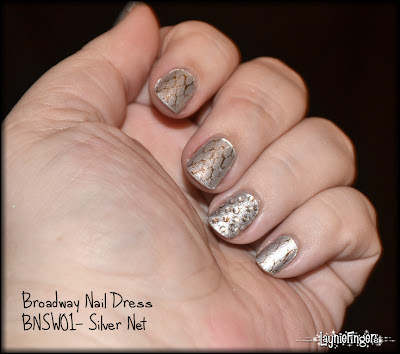 They turned out looking almost like dewdrops! I really did like the look, although it was sort of odd. I topped everything off with a coat of Seche Vite and called it finished! Unfortunately, these were almost impossible to photograph!! They're so shiny, with a sort of brushed-silver background and a metallic silver net pattern. Gorgeous, but my camera HATED me!

I did get a few pics to show sort of how they looked, but it was rough! Still, in person I liked them a lot. There was just enough interest to keep me happy without being all BOOM POW RAINBOWS IN YOUR FACE! The ladies at the doctor's office seemed to like this manicure as well, which is also fun. And next time?

Who knows. Maybe a monster manicure, or turkeys, or... who knows? I'll figure something fun out. I always do!

So, long story short- if you're fighting with chronic pain, you do have options. Talk to your doctor, talk to your family... even if it feels like there's no hope, you might be surprised. And you are definitely not alone.

Items were provided by the manufacturers for consideration.
See my disclosure statement for more information.
Posted at 11:15 PM 2 comments:

Honesty time- have you ever noticed that sometimes you find yourself reaching for certain polishes over and over again? I still have untried polishes waiting to be worn, and yet on days when I can't quite decide what to wear I find myself reaching for Dr.'s Remedy Lovely Lavender polish. Or Desire Dark Brown. Or even the Revive Ruby Red... they're great polishes, and they wear like a dream. 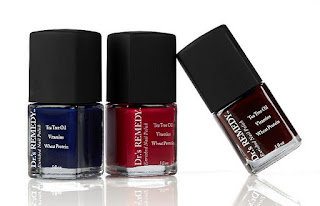 You can imagine how excited I was to get the email saying the Fall 2011 collection is coming out. The colors are perfect for fall, deep rich saturated colors that make me think of crisp air, leather boots, and laughter. There may only be three colors in this release, but they all seem absolutely lovely from what I can tell! 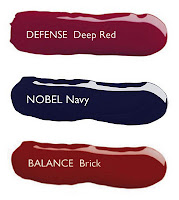 It's hard to tell what the colors will look like from the images released. Defense Deep Red seems to be a cool-toned red, Balance Brick seems to be *gasp* brick red, and Nobel Navy would be... navy blue? These are all colors I can see myself wearing happily.


Maybe it's just me, but I can totally see the navy being used as a base for a galaxy manicure, or for a night sky treeline. I'm really drawn to skies, and I love night skies as much as day skies. Now I want to play with these!

DEFENSE Deep Red: A rich bordeaux with a mystifying matte finish
NOBEL Navy: A sea-at-dusk shade that reflects light and brings dimension to tips and toes alike
BALANCE Brick: A modern maroon with body and balance

Dr.'s REMEDY Enriched Nail Polish is $17 and available for purchase online at www.remedynails.com.

Dr.'s REMEDY is a line of doctor-inspired cosmetics that is dedicated to using clean, hypo-allergenic ingredients. The birth-child of two New York-based podiatrists, Dr. Adam Cirlincione and Dr. William Spielfogel, Dr.'s REMEDY proves quintessentially-perfect for any person looking to better the condition of her skin and nails; their Enriched Nail Polish is the first-ever nail polish on the market approved by the American Podiatric Medical Association. Dr.'s REMEDY is sold online at www.remedynails.com or by calling 1-877-323-NAIL.


So tell me, what do you think about these polishes? How would you use them if you got them?

Polish images were provided by the manufacturer for consideration.
Header image created by Laynie.
See my disclosure statement for more information.
Posted at 6:09 AM No comments:

I know, I know. It's been a while. I'll blog more about this soon, but right now I'd rather focus on something that has me excited! Maybe this is leading into a better time... 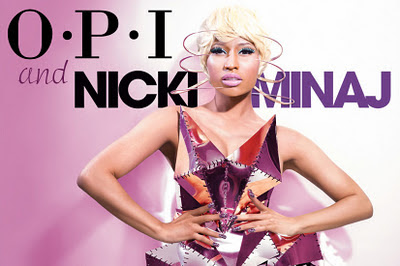 You may have heard something about this... OPI is joining forces with Nicki Minaj to put out a fun, vibrant collection of polishes that are absolutely screaming my name! Honestly, I'm not that much of a fan of Nicki Minaj, mostly because I don't like the music she does. But I have to say, I respect the hell out of her as a businessperson and an artist!

Nicki is known for her vibrant, colorful style, and these polishes really do match perfectly. From the vibrant blue of Fly to the holographic gorgeousness of Save Me, these are all stand-out brights that call attention.

Ok, I have to admit, I'm not exactly jumping up and down over the idea of holographic bar glitter. Really? Hairy rainbow nails? But apparently, I'm in the minority, because it looks like bar glitter is coming back in a big way this season. Yippee.

I know, I know, quit yapping, Laynie. Show the colors!!

You can click each of those to make 'em bigger if you like. Is that blue insanely gorgeous or what? Also, notice that Super Bass is a shimmery shatter, sort of like Sally Hansen's Vintage Violet shatter polish. I'm not sure how alike they'll be in person, but they do remind me of each other! I really like what I'm seeing of Metallic 4 Life. It's got an almost Deborah Lippmann vibe to it! And I'm just not sure how I feel about Save Me...

What are your thoughts? Do any of these colors excite you? Are you planning to rock Pink Friday on your nails as well as your iPod? Leave me a comment and let me know!

Press release was provided by the manufacturer for consideration.
Graphic adapted from original at http://mypinkfriday.com.
See my disclosure statement for more information.
Posted at 2:19 AM No comments: