I love Twitter. I really do... I've met so many wonderful people over it, and I've even gotten to interact with some of my favorite celebrities through it. But I think one of the things I enjoy most are the late-night twitter giveaways.

See, lots of people are using Twitter as a marketing tool. So, at random times they'll host a giveaway where if people reply over twitter, they'll win a prize. It's loads of fun and gets you interacting with people. Plus hey, you win stuff!

As an example, I was online one night and the owner of Overall Beauty came on with a twitter contest. She asked if she said she had a manbug in her hand, what was she talking about? Since I had nail polish on the brain, I asked if it would mean she had a BB Couture nail polish, and sure enough I was right! A few days later, a cute little package arrived at my house complete with 2 eyeshadow samples, a business card, and a lovely handwritten card! I've still got the card hanging on my bulletin board!

So, since I've got the time now, I wanted to show you Manbug in all its beauty. I think it makes more of an effective layering polish because I can't stand visible nail line. This first swatch shows how it looks over both white nail polish and black polish. The sparkles show up more dramatically over the black, but it's still lovely over white.

I also put this polish over some artificial nails with a french manicure. This didn't work so well... the polish applies beautifully, but it's just so intensely sheer. I'm not terribly fond sheer sheers, and wound up putting on either 4 or 5 coats of Manbug. Even so, I still had visible nail line! =/ 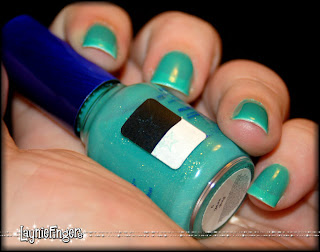 But it is one gorgeous sheer polish. I love the softness of the color, and while at first I was sure it would look horrible on me, I was actually kind of surprised to see it looked ok.

Unfortunately, it's not a polish you can stamp with. It's so sheer it's like trying to stamp with air! You can see on the stample that there's just a hint of color that shows.

So overall, I'm looking forward to trying more BB Couture polishes, but Manbug isn't one I'll be wearing often, unless I can figure out a cool layered recipe for it.

What do you think- is Manbug a keeper?