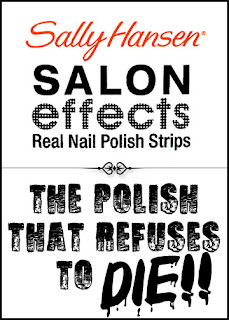 I have a new obsession. I'm waiting for my Sally Hansen Salon Effect Nail Polish Strips to reach a point where they absolutely have to be removed, either because they've chipped or because they've simply grown out too far. So far, we're at day 15 and I have a tiny bit of tipwear on my right index finger, although I have to look at it up close to notice it.

Unfortunately, that makes for a very boring blog. I can't exactly show you guys another photo of the same nails, with the same polish, just a fraction of a smidge farther out on my nail thanks to new growth. (Although this gives me an idea for the next set I wear!) I think you guys would be even more bored to tears than I am with this manicure.

So, in the interest of keeping people awake, I've decided to show some things I've had sitting in the archive, waiting to be posted about. One of those things is an utterly fabulous polish from Glitter Gal. For those of you who aren't familiar with Glitter Gal, they're a wonderful Australian cosmetics company that do an absolutely gorgeous line of holographic polishes, as well as lots of other goodies that I'm dying to get my fingers on. 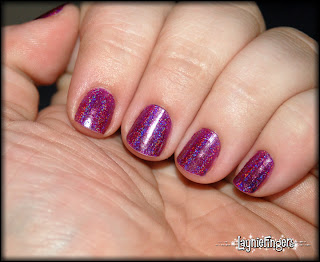 I've had this polish for a little while now, and I've worn it a couple of times but had problems getting photos of it. Even now, the best photo I have of it simply doesn't capture the beauty of the holo in this one. But it comes pretty close... This polish is absolutely gorgeous.

What you can't see in this photo is the amount of holographic beauty this baby shows. I even decided I would do a video to try and show you how wonderfully it flashes in the sun... except that you actually need sunlight to do that. It was a gorgeous sunny day, too, so I grabbed my husband and said, "Quick, let's take video of my nails!"

We rushed outside and got set up, only to see a giant cloud bank roll in. We stayed out for half an hour, getting brief flashes of sun that would disappear before we got a chance to video anything. Finally as we were giving up the clouds parted and I managed the brief video below. If you look closely, you can see the light disappear at the end of it!

Also, you can see the holo better if you watch at 720 HD. For some reason, the compression on this video sucked out all the gorgeous rainbow goodness, which made me sad. Still, the internet is pretty darned amazing, so I won't complain too much.

EDIT: And now, an additional video to show the holo in the bottle! Hopefully this one will show it a bit better...

Glitter Gal has over 70 colors to choose from, including 15 holographic polishes. They range in price from $11.95 to $14.95 and they take PayPal for those of us who don't live in Australia! I'm already planning my next order!

Polish was provided by the manufacturer for consideration.
See my disclosure statement for more information.
Posted at 11:49 PM 4 comments: