My husband got me a surprise! 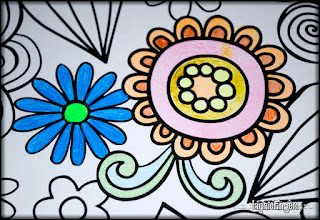 My husband is awesome. We've never been particularly wealthy financially, but I feel like we're beyond rich in love. I know it sounds disgusting, but it's true... and we go out of our way to show it as often as possible.

Take for example a couple of days ago. I'd been home, feeling like I was going to die from the plague (or just feel really really gross for the rest of my probably-short life), so he and our son went to the grocery store to pick up a few things. While they were out, he found in the clearance aisle of the local big box store a packet of folders. 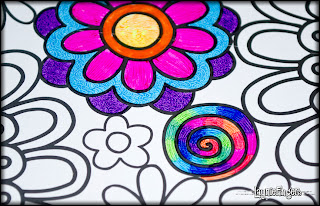 These folders were especially interesting because instead of having pretty colored designs on them, they were black and white- they were designed for you to color in with your own colors, your own designs. He knew I'd seen them multiple times and thought about buying them, only to decide they were too expensive for what they were.

Have I mentioned I'm frugal? Yea. Just a bit...

That night, he came in and told me to close my eyes. Then he pulled out the goodies he'd found one by one, placing them in front of me. His eyes beamed with love as I giggled (and blew my nose, and coughed), and once again I thought just how lucky I am to have married my best friend.