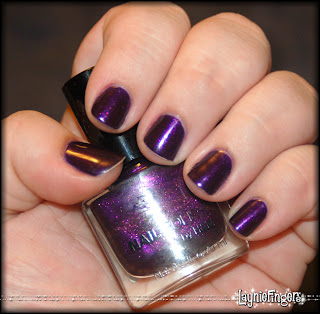 Some days I'm in the mood for something light and airy, something feminine. I want to feel delicate, and a pastel color is absolutely perfect. Let's just say today is not one of those days.

Instead, I went for a vampy purple, something that would stand out on my nails and make me feel the slightest bit ... hmm, evil? Seductive? Sassy definitely isn't the word, although it's probably related to it.  It's one of those mysterious shades that draws you in, that hints at a hidden past or a secret kept deep inside. H&M's Goddess On Stage was exactly what I was looking for.

I got this polish in a prize package from Scandalously Polished, along with about a million other polishes. This polish absolutely sang to me, calling to me. I'd used it in an earlier Konad failicure, but I wanted to wear it as a full manicure on its own. I wasn't disappointed. 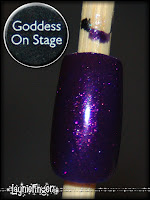 Goddess on Stage is stunning. It's an almost black reddish purple that has an almost hidden shimmer. In some lights it passes for black, but in others the shimmer will catch the light in an absolutely stunning display. I wish the shimmer showed as much on the nail as it does in the bottle, but it's still very pretty.

One problem that I noticed is that I got tipwear very quickly with it. While I can usually wear most polishes for at least 2 days without noticeable tipwear, I noticed it after just half a day with Goddess on Stage. However, I'm not sure if it's the polish or the new base coat I'm using. I've recently began using Qtica Natural Nail Growth Simulator to see if I can get some length on my nails. So far, no luck... but it's only been less than a week or so. I think it might need more than that to show a difference. I'll have to try this with my usual base coat again to see if it wears better. 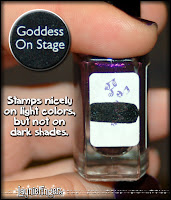 As I mentioned earlier, I used this polish to stamp with in an earlier manicure. It stamps really well, if somewhat faintly. Unfortunately, it only shows up well on lighter colors- on dark colors it doesn't show at all. That's not surprising, when you consider how dark a polish it is to begin with. I can't complain about it, though. It stamped beautifully on the last manicure!

Overall, this is a polish I'm glad to have added to my collection. I'm tempted to put a coat of Sally Hansen's Mist You over it, or perhaps my CND Sapphire Sparkle. I think either of those could make this look gorgeous! *jots this idea down into the notebook of planned manicures*

Tomorrow I'll show the manicure I tweeted about. Unfortunately, I tried to Konad over Goddess on Stage and kinda made an ugly look. It's a failicure, unfortunately, although the pictures make it look less of a failure than it really is. But that's for tomorrow...