I am a bad, bad blogger. I took this shot several weeks ago and meant to share it, but then I got totally sidetracked. It's a good thing I'm not a doctor or an air traffic controller or something, else people would be dying while I wondered what it was I'd needed to do...

So, today's nail art is sort of backwards, in that you do the nail art first and then cover it up with your base coat. I know, it sounds totally bizarre, but look at the end result! 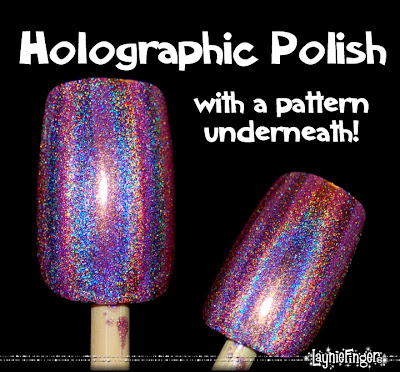 This was a super easy look, and it will absolutely make people look at your nails. I started with a base coat of solid white, just a cheapie 99 cent white polish from Love My Nails. It works well enough, although it tends to streak a bit on the first coat. Still, for 99 cents I'll deal.

Once that had dried a bit, I used my Art Deco black striper to draw vertical stripes down my nails fairly evenly spaced. This is a cute look on its own, but I had something else in mind. I'd noticed that the Sally Hansen Purple Diamond Nail Prisms dries very translucent, and I wanted to experiment with it.

Once the black and white had dried, I brushed a layer of Purple Diamond over the stripes and sat back to watch it dry. I wish I had video capabilities, because this is an absolutely gorgeous look. It's subtle enough to not look like you're wearing circus tent stripes on your nails, but it's still striped enough to make people wonder how you managed it. I can't wait to wear this one as a full manicure.

So what do you think- do you want to try some hidden nail art? Does it look interesting to you?

Can holographic polishes really be called understated? Who knows?
See my disclosure statement for more information.
Posted at 10:29 PM 8 comments: