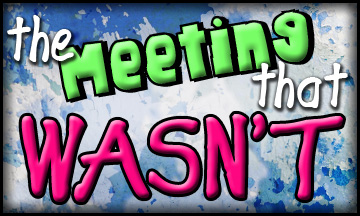 Ahhh, what a day! I'm finally starting to sleep again, although that seems to have been both a good thing and a bad thing today! My husband let me sleep in, but he started trying to wake me up around 10 or 11am. I was too tired, though, so I kept saying, "Just a little longer please!"

Keep in mind, I didn't go to bed til 5am, so it wasn't that odd for me to be sleepy still! And sweetheart that he is, he let me sleep. I finally woke up around 1:45, excited because we were planning to go to a meeting of the local Cartoonist Society!

Then I asked him what time the meeting started, so I'd know when we needed to leave. Oops! It was supposed to start at 2! I hopped up, threw my clothes on, and we were out the door by 2. We figured we'd miss the beginning of the meeting, but it'd be better than missing the whole thing! Except... 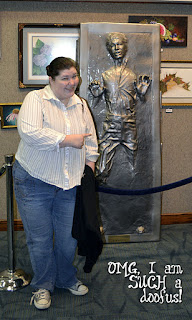 Somehow we'd gotten the date wrong, AGAIN! Instead of the meeting we were hoping to make, there was a meeting of the local Star Wars club. The cool part is that there were so many cool people walking around in costume!! Storm troopers, Jedis, and even a Darth Maul who could have stepped right out of the film! We'd even brought our camera, but I felt too self-conscious to ask for a picture with anyone.

However, I didn't feel too self-conscious to snap a quick pic with Han Solo! Then again, that's probably because I didn't have to ask him for permission. I know, I'm a total goofball!

I'd have nail pics, but I didn't do mine today! But tomorrow... I've got a simple halloween manicure planned, so check back!

Han Solo in carbonite was provided by Jabba the Hut.
See my disclosure statement for more information.
Posted at 12:21 AM

Thanks so much for taking the time to comment. I may not reply due to time constraints, but I read every comment and I appreciate them all!

Please don't leave links in my comments unless they directly apply to a conversation. If you want a link exchange, feel free to email me. Spam links will be deleted.